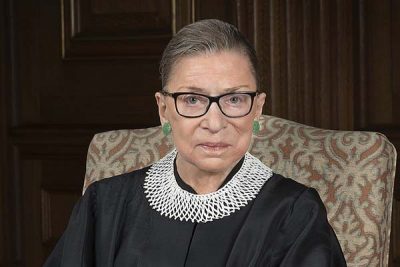 On September 18, the United States of America lost a fervent champion of gender equality: Supreme Court Justice Ruth Bader Ginsburg. Despite the pandemic, scores of people gathered spontaneously outside the Marble Palace that houses the nine Supreme Court Justices, to mourn the loss of the eminent jurist.

Ginsburg was nominated by President Bill Clinton on June 14, 1993 and has served since August 10, 1993. She was the second woman–after Sandra Day O’Connor–to serve as justice in the Supreme Court. She was called “Notorious RBG” for her numerous dissenting comments and her insistence on raising pertinent questions that took a different view from the established line. The New York Times wrote an all caps headline, a style reserved for momentous happenings, on her passing away.

A report in The Indian Express details some of her game-changing verdicts: “In 1996, Ginsburg wrote the majority opinion for the landmark United States v. Virginia case, which ended the Virginia Military Institute’s archaic men-only admission policy. The 7-1 ruling stated that the institute’s admission policy stood in violation of the Fourteenth Amendment’s Equal Protection Clause….In her opinion, Ginsburg wrote: Generalizations about ‘the way women are,’ estimates of what is appropriate for most women, no longer justify denying opportunity to women whose talent and capacity place them outside the average description.”

The Express mentions another case, the Ledbetter v. Goodyear Tire and Rubber company case, where Ginsburg supported equal wages and called on the Congress to take action, which ultimately led to the passing of the Lilly Ledbetter Fair Pay Act, signed by President Barack Obama in 2009. “In our view, the court does not comprehend, or is indifferent to, the insidious way in which women can be victims of pay discrimination,” Ginsburg had stated. “The ball is in Congress’ court…to correct this Court’s parsimonious reading of Title VII.”

Ginsburg had litigated several crucial cases in the Supreme Court. Clinton was not exaggerating when, on her appointment, he said: “Ruth Bader Ginsberg does not need a seat on the Supreme Court to earn her place in the American history books. She has already done that.” .

What makes Ginsburg’s contribution so phenomenal is because she spoke for the people. She rose to power due to her diligent work ethic and her uncompromising stands earned her laurels. She dealt with setbacks in her personal life and in her career with dignity. She was a mother of two, loved opera, and was a fitness enthusiast. The 2018 documentary RBG on Netflix is a riveting intimate portrayal; the film explores how her legal battles changed the world for women in the US.

Ginsberg will be remembered for playing a pivotal role in advancing the cause of women’s rights and in shaping laws that accorded dignity to the marginalized.

Ginsberg remained a tireless worker till the last. She had been battling pancreatic cancer and undergoing chemotherapy for the last few months. Despite the medical ordeal, she showed up nearly every day of oral arguments in the US apex court for nearly three decades. She served for 27 years in the US Supreme Court and passed away at the age of 87.