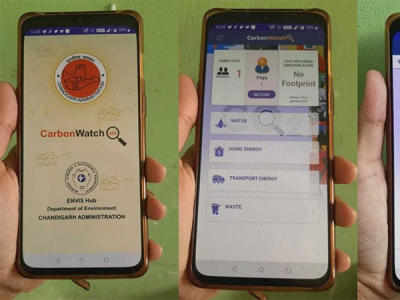 In an innovative move, Chandigarh becomes the first state or Union Territory in India to launch Carbon Watch, a mobile application that helps to calculate the carbon footprint of an individual. Carbon Watch will allow users to determine their carbon footprint and will suggest ways to reduce it. Carbon footprint is the amount of greenhouse gases, especially carbon dioxide, released into the atmosphere as a result of the activities of a particular individual, organisation or a community.

The application is currently available on Android exclusively. It can be downloaded by scanning a QR Code or by accessing url https://play.google.com/ store/apps/details?id=com.carboneye. Users can send their feedback by writing to ch-env@nic.in.

The app suggests remedial actions and makes people aware about their carbon emissions based on their lifestyle choices, their impact and possible countermeasures to mitigate the same. For instance, if a user travels by car, the app might suggest exploring a car-pool option, taking public transport or a bicycle.

Although Chandigarh, with a population of 10.6 lakhs, is one of the cities which has achieved a surplus of 45 percent green cover instead of the set target of 33 percent, it still faces pollution problems). It has been selected as one of the 25 non-attainment cities for the Source Apportionment and Carrying Capacity (SACC) study, conducted by the Central Pollution Control Board (CPCB) in November 2020 ). Vehicular pollution and emissions generated by neighbouring states, including Punjab, Haryana and Himachal Pradesh, are the main reasons cited for the poor air quality of Chandigarh.

The Carbon Watch app, developed by the Department of Environment and Forest, Union Territory (UT), is a laudable step to make people aware of their environmental responsibilities.