The delayed monsoon this year has severely affected many areas in the country, and especially Chennai, which has been reeling under severe water shortage. According to World Health Organization (WHO), by 2025, half of the global population will be living in “water-stressed areas”.

According to the Newsweek, ‘The formation is an aquifer—an underground layer of permeable rock that can contain groundwater. A survey of the region showed it stretches 50 miles out to sea and extends from at least Massachusetts to New Jersey—and possibly as far as Rhode Island, Connecticut and New York.’ Therefore news reports suggesting that scientists have discovered a huge reservoir of potentially freshwater hidden beneath the ocean off the east coast of the US, came as pleasant tidings.

The volume of water locked up is reported to be 670 cubic miles. This would make the aquifer the biggest formation of its kind, Newsweek reports. The research team was led by Chloe Gustafson from Columbia University’s Lamont-Doherty Earth Observatory. They were building on previous surveys that had shown pockets of fresh water exist in the sediments beneath the salty ocean. Scientists believe similar aquifers may exist across the globe—potentially providing a source of fresh water in regions where access to this resource is becoming more and more limited.

Interestingly, Newsweek reports that evidence of an aquifer first emerged in the 1970s when companies drilling for oil would occasionally hit a pocket of freshwater instead. However, it was unclear whether these were isolated regions, or if they represent pieces of a larger structure. In 2015, using technology that had previously been used by oil companies to search for oil, researchers started studying the coast off New Jersey and Massachusetts, where pockets of fresh water sediments had previously been identified. Their findings, reports Newsweek, have now been published in the journal, Scientific Reports. 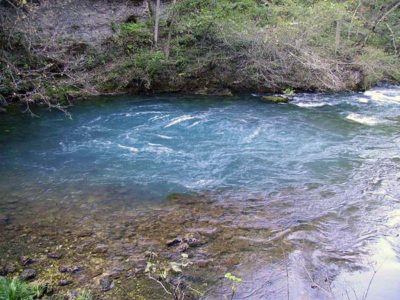